NOLA/ Nawlins/ New Orleans was hands down one of the craziest cities I’ve ever been to. Admittedly, we did get there just in time for Mardi Gras 😉 …But trust me, this city has NO shortage of activities. 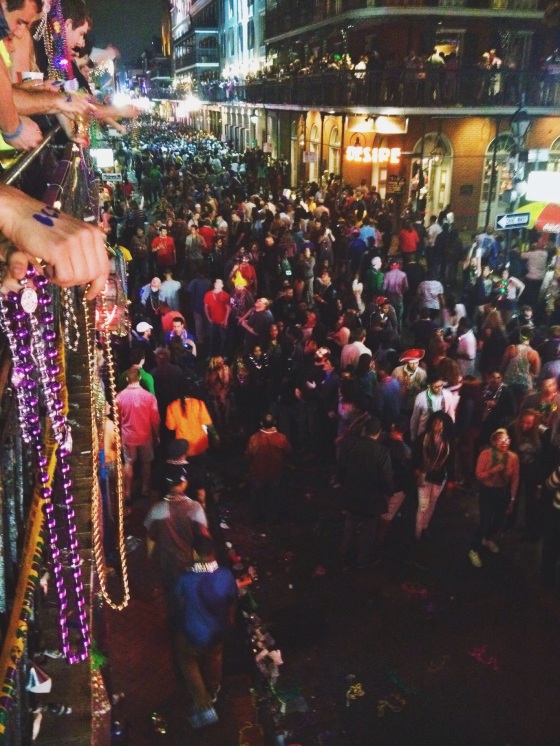 The Big Easy treated us very well, and if you haven’t been yet, you are missing out on, what is in my opinion, one of the best cities in America.

New Orleans is beautiful–inside and out. I was swoon from the get-go. The culture of this place is unparalleled to any other city I’ve been to in the U.S.. The music, the food, and the pure love of life that exudes from every street corner is something to revel in. 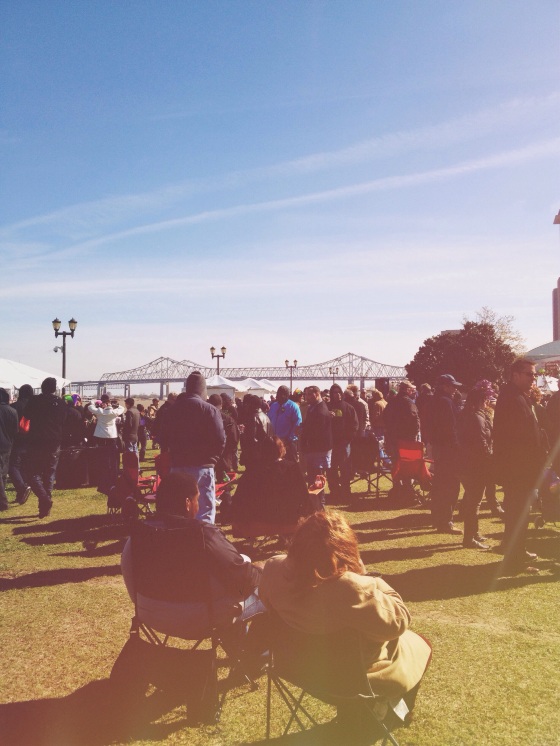 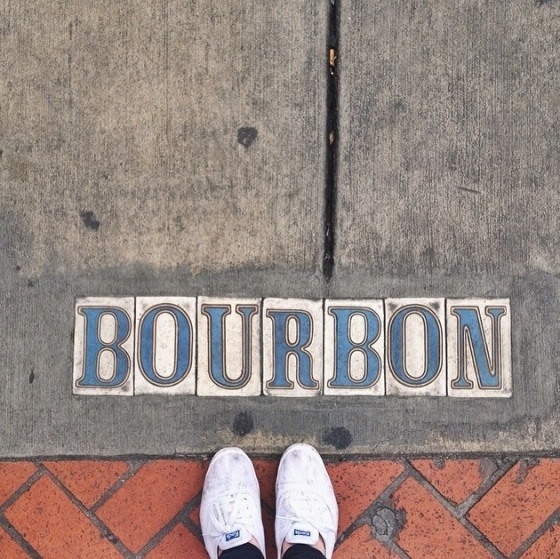 My friends and I were in New Orleans for 5 days and by the end of the trip we were all wishing we lived there. The vibe of NOLA is super relaxed and if you just let yourself wander, you’ll stumble into the most incredible things and truly get the most out of this city:

Who’s been to New Orleans before? I’d definitely like to go back again and would love to hear more suggestions!

PS- If you want to see more pictures from my trip, check out my Instagram and Flickr! xx

I know I’ve been on hiatus for quite awhile now, but hopefully this post will make up for at least a little bit of the lost time! I’ve been pretty busy the last couple months because it is my last semester as an undergrad in college (read: endless job hunting, a lot of senior projects, and of course all those extracurriculars…)

Excuses excuses, right? Anyways, I finally added photos from my Dubai trip to the ‘Snapshot‘ section of my blog! Check ’em out and let me know what you think!

Also, stay tuned because I’ll be uploading some of my spring break pictures! A few friends and I decided to road trip down to New Orleans to celebrate Mardi Gras and we also stopped in Nashville on the way back!

Hello fellow bloggers! I just wanted to let you know that I decided to get a flickr account. I’ve always loved taking photos, as you know, I’ve shared some of my snapshots on this blog, but I wanted to start a more comprehensive photography portfolio with pictures from both my past and present. I’ve uploaded some photos to my profile that I’ve taken with my camera and my phone. I’m also beginning to play around with editing and would appreciate any feedback you might have! Are any of you on Flickr? I’d love to check out your stream and also get your suggestions on other good accounts to follow. Comment below!

For my most recent CAS (Intro to Creative Process) assignment, our professor asked us to “shoot a photo that tells a story.” At first this seemed like a really arduous task. I started looking through my photo albums for inspiration and I began to notice that there were certain photos of mine that were just kind-of odd. By odd I mean, they weren’t of my friends or family, or even a pretty view, they were just weird. I started wondering to myself why I took these photos in the first place. Then I realized it was because I was trying to understand their story. These are some faces and places that created a curious scene which I just happened to capture. 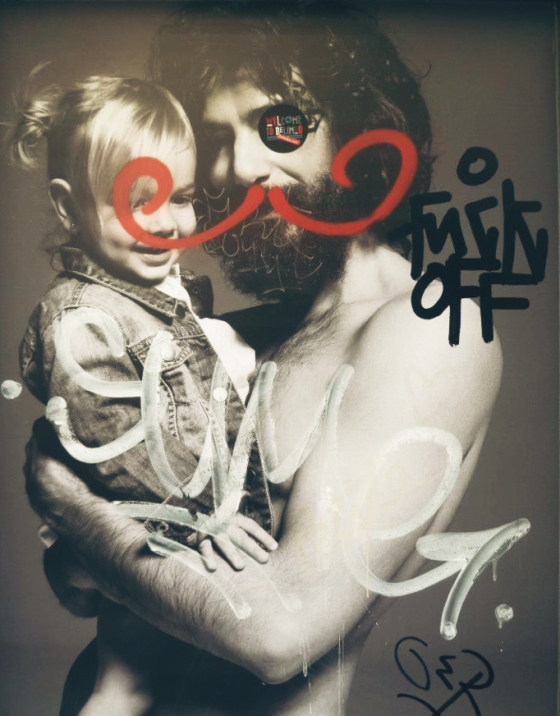 I stumbled upon this billboard that had been covered in graffiti. I took a photo because I found it odd that the store was trying to portray this classic happy family, but someone had just spray painted over it. Quite the juxtaposition. (PS- This is the photo I decided to submit for my class assignment.)

I took the photo above while I was on vacation in Toronto, Canada. I spent the day exploring China Town. I thought this was odd because this woman is so saturated in the kitschiness of her culture, she is practically drown out. You almost don’t even notice her, she could disappear.

I also took this photo while in Toronto. I enjoyed this because 2 of the girls are trying to plan their day using a map while the other girl is relying on her smartphone. The girl to the far right is staring idly, almost unsure of who to listen to for directions. I thought this was funny because 10 years ago, everyone would have used a map. It’s scary how quickly technology changes things.

I was about to use this photo for my assignment. I took it of my cat when I visited home a couple months ago. I love this because my cat’s eyes seem kind of concerned meanwhile the porcelain cat is totally at peace. It’s almost like my cat had just realized the new friend she made wasn’t exactly real. 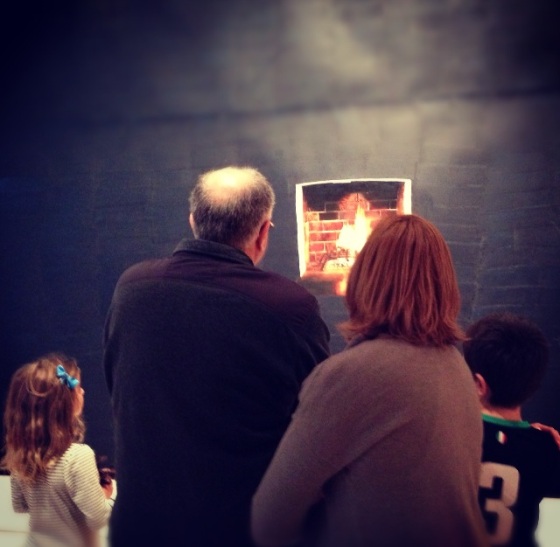 I took this photo at the Broad Art Museum. I thought it was interesting because there was a painting of a fireplace on the wall and this family was staring at it so intently and for so long. It made it seem like they longed to all sit in front of a fireplace, but they were unsure how. 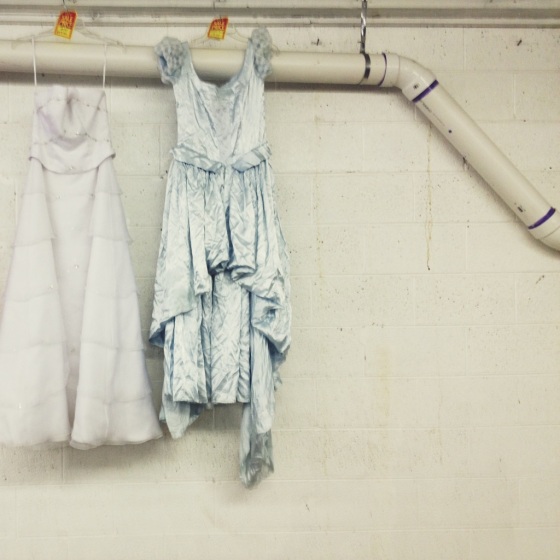 I took this while thrifting this weekend. It stood out to me because I’m so used to seeing extravagant displays when it comes to dresses in stores. This was refreshing and kind of harsh as well. It really just showed the difference in priorities and what some people find important as opposed to others.

What do you think of these photos? Have you captured any unique moments? Do you have tips on how to tell a story through a photo? Comment below and let me know!

Feel free to reach out! I’d love to hear from you: alicenaser@yahoo.com