In class we were asked to brainstorm other uses for a Spork as well as a dentist’s chair. Here’s what I came up with:

For my most recent CAS (Intro to Creative Process) assignment, our professor asked us to “shoot a photo that tells a story.” At first this seemed like a really arduous task. I started looking through my photo albums for inspiration and I began to notice that there were certain photos of mine that were just kind-of odd. By odd I mean, they weren’t of my friends or family, or even a pretty view, they were just weird. I started wondering to myself why I took these photos in the first place. Then I realized it was because I was trying to understand their story. These are some faces and places that created a curious scene which I just happened to capture.

I stumbled upon this billboard that had been covered in graffiti. I took a photo because I found it odd that the store was trying to portray this classic happy family, but someone had just spray painted over it. Quite the juxtaposition. (PS- This is the photo I decided to submit for my class assignment.) 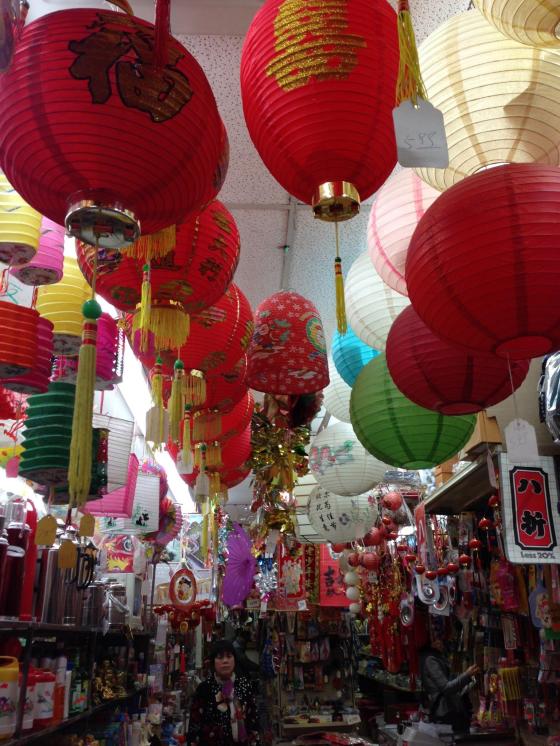 I took the photo above while I was on vacation in Toronto, Canada. I spent the day exploring China Town. I thought this was odd because this woman is so saturated in the kitschiness of her culture, she is practically drown out. You almost don’t even notice her, she could disappear. 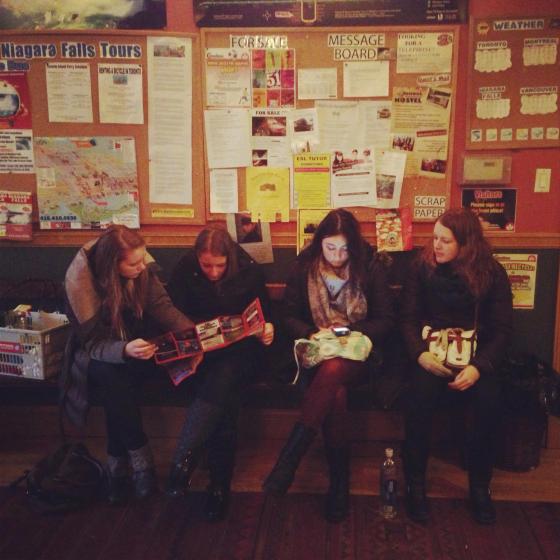 I also took this photo while in Toronto. I enjoyed this because 2 of the girls are trying to plan their day using a map while the other girl is relying on her smartphone. The girl to the far right is staring idly, almost unsure of who to listen to for directions. I thought this was funny because 10 years ago, everyone would have used a map. It’s scary how quickly technology changes things.

I was about to use this photo for my assignment. I took it of my cat when I visited home a couple months ago. I love this because my cat’s eyes seem kind of concerned meanwhile the porcelain cat is totally at peace. It’s almost like my cat had just realized the new friend she made wasn’t exactly real.

I took this photo at the Broad Art Museum. I thought it was interesting because there was a painting of a fireplace on the wall and this family was staring at it so intently and for so long. It made it seem like they longed to all sit in front of a fireplace, but they were unsure how.

I took this while thrifting this weekend. It stood out to me because I’m so used to seeing extravagant displays when it comes to dresses in stores. This was refreshing and kind of harsh as well. It really just showed the difference in priorities and what some people find important as opposed to others.

What do you think of these photos? Have you captured any unique moments? Do you have tips on how to tell a story through a photo? Comment below and let me know!

For our most recent CAS 110 homework assignment we were asked to create a diagram of the terms surrounding the creative process (knowledge, inspiration, imagination, creativity, and innovation). Using the previous in-class activity, I took what the words meant to … END_OF_DOCUMENT_TOKEN_TO_BE_REPLACED

In my CAS 110 class we were asked to define the following words: creativity, imagination, inspiration, knowledge, and innovation. This is what I wrote down. What do these words mean to you?

Lateral thinking is described as a way to imagine differently. The challenge is to come up with an answer to a seemingly impossible or ridiculous situation. Logic isn’t your friend when thinking about a way to solve the problem—at first this can be extremely irritating—but once you decide to get creative, the process is a lot of fun.

This week in my creative advertising class, we were asked to find two solutions to the following lateral thinking puzzle: “A young girl walks into a field and turns on a TV.”

In addition to just brainstorming solutions to the puzzle, we were asked to draw out our favorite solution and then write the other one out. My drawing looks like something a second grader came up with, but you know what, I’m proud of it. 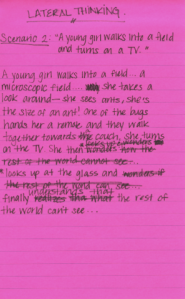 What do you require to be your most creative? This my check-list (..if you can even call it that?)

CAS 110 Exercise from yesterday. We took a few minutes to write anything having to do with the word “tracks”.

1. What are things you take for granted in your life, that are givens, that are undeniably true?

2. What are your strengths?

3. What are your weaknesses?

There was an error retrieving images from Instagram. An attempt will be remade in a few minutes.

Feel free to reach out! I’d love to hear from you: alicenaser@yahoo.com